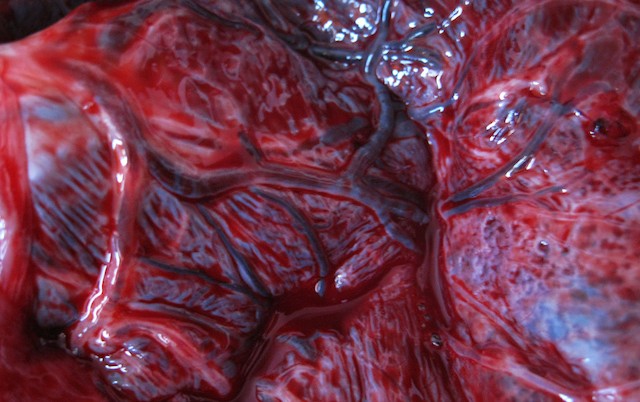 After writing Kung Pao Placenta, my blog about my impression of placenta encapsulation from a Chef’s perspective, I had the opportunity to attend a Postpartum Placenta Specialist Workshop and get some “hands on” experience.

The training was facilitated by Deb Pocica on a Saturday and Sunday where we got hit with nearly three feet of snow. After taking four hours to drive the 72 miles to the training, I arrived to be greeted by a room full of doulas and birth professionals. Some of them recognized me from my work with ProDoula and some of them had no idea who I was or what I (a man) was doing at the training.

I sat outside of the circle next to Sugar the dog and just listened while the trainer went over the basics of the anatomy of the placenta and what function it serves for the mother and child.

We moved on to a rich history lesson of placenta uses for both humans and other mammals. There was in depth discussion on safety for handling and preparing the placenta and finally we talked about fielding the endless line of questions one might be asked before, during and after an encapsulation.

We broke for lunch and I got a chance to take a look at the placenta in the freezer bag. I could easily identify all of the parts after my earlier anatomy lesson and I even got to handle it while it was still in the bag.

After everyone ate we donned our safety gear and prepared the kitchen for the main event.

Deb opened the bag and removed the placenta.

Instantly I was hit by the “smell” of it.

I can’t describe it because it was more of a feeling than a smell.

In my career as a chef I’ve butchered literally tons of meat, sometimes even whole animals. I’ve encountered spoiled items that have passed their prime and I can say that nothing I’ve ever encountered has had so strong a smell. A smell that I couldn’t relate or compare to anything. A smell that penetrated my senses and stayed with me long after I left that day.

I’ve always heard that death, as well as birth have very unique smells along with sex and now we’ll add placenta to that list.

I remember saying out loud “Does anyone else smell that?”

after the placenta had been out of the bag for less than 20 seconds.

Everyone looked at me behind their safety goggles and surgeon masks like I was crazy. I excused myself to the family room where my old pal Sugar was pacing in his cage. The smell was there as well even though the family room was located on the other side of the house.

All of a sudden, my sinuses cleared and I was breathing heavily but not in a violent sort of way. It was almost as if my senses were heightened or even enhanced. My heart rate increased, my head began to tingle almost like the onset of a headache or a really bad hangover, but there was no pain.

All of the hair on my body stood on end but there were no goose bumps to accompany it and I was standing next to the fireplace, so there was no chill in the air.

I looked down and all of my fingers were twitching, I could feel the same thing going on inside of my boots with my toes.

I took one look over at Sugar in his cage and we made eye contact. Something was going on with him too…

As someone who is very in tune with their body at all times I could tell something was happening that I had no control over. Something about my body chemistry had changed.

I wasn’t grossed out or nauseous but my body was reacting to something in that house. Maybe it was witchcraft or voodoo or even aliens, I don’t know.

There was something powerful about what was happening and every fiber of my being was aware of it.

The women in the room that experienced no such reaction had all given birth before or been present at many births. They seemed to think I was having some sort of reaction to the hormones present in the placenta.

I was reminded of the study that was done half a century ago that involved introducing placentas into the cages of mice who had never given birth before and their reactions.

Whether you are into placenta consumption and encapsulation or not, just know that there is something very powerful present in that organ. It moved me and I respect it.

If you read my previous post titled Kung Pao Placenta you may recall that I came to a pretty strong (some might say controversial) conclusion that you should only be encapsulating in the client’s home and ensuring a strict and efficient chain of control in transporting and preparing the placenta.

I will admit that when I wrote that post I had never seen a placenta or a live birth. That conclusion that I arrived to was solely from a Chef’s perspective based on my experience in the food service industry.

Now that I’ve been around the block I am even more convinced that my previous conclusion is not only valid but important to the well being of YOUR family and even your pets!